A New Pollinator Garden Along the Trinity Trails

A New Pollinator Garden Along the Trinity Trails

They gave these parameters for the design:

The designated area is located along the trails at Marine Creek, near the TCC NW campus and other public schools. The area was previously a parking lot that was demolished to make way for a natural feature along the trails. After the parking lot was cleared, about 1-2 years previous to the pollinator garden request, soil was treated and seeding was done to recreate a native prairie. Within that area, a clearing was left to accommodate a more formal garden.

Four designs were created with the requests in mind. Gardens differed by the design style, and by the amount of newly purchased plants and materials. 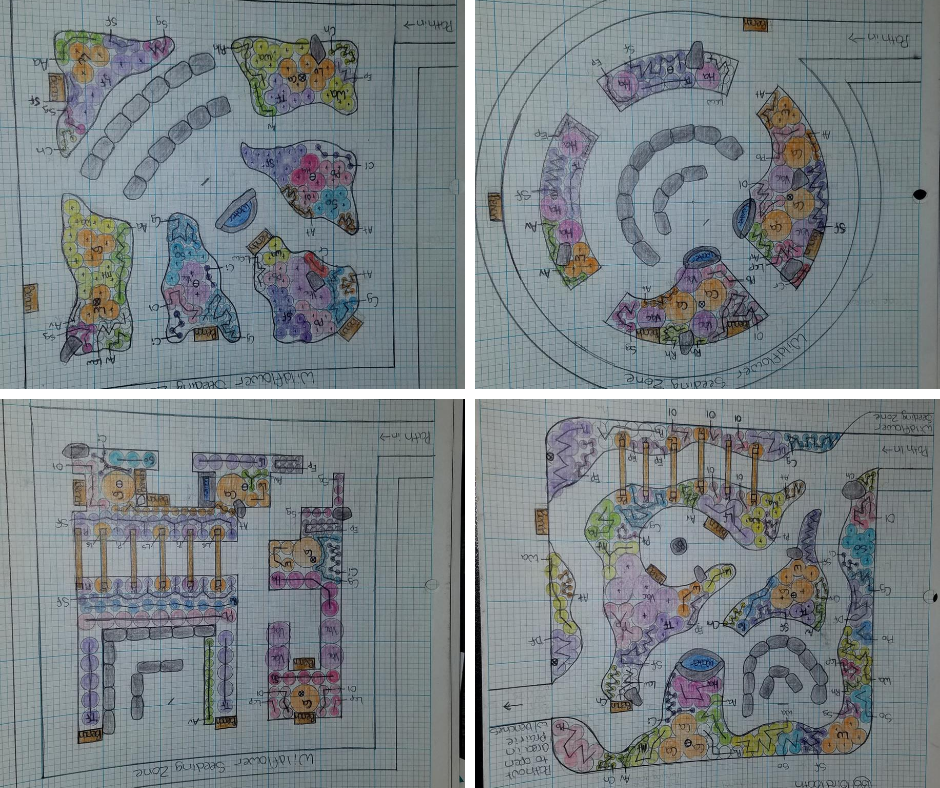 All 4 design options were given to TCC and one was chosen based on aesthetics and function. 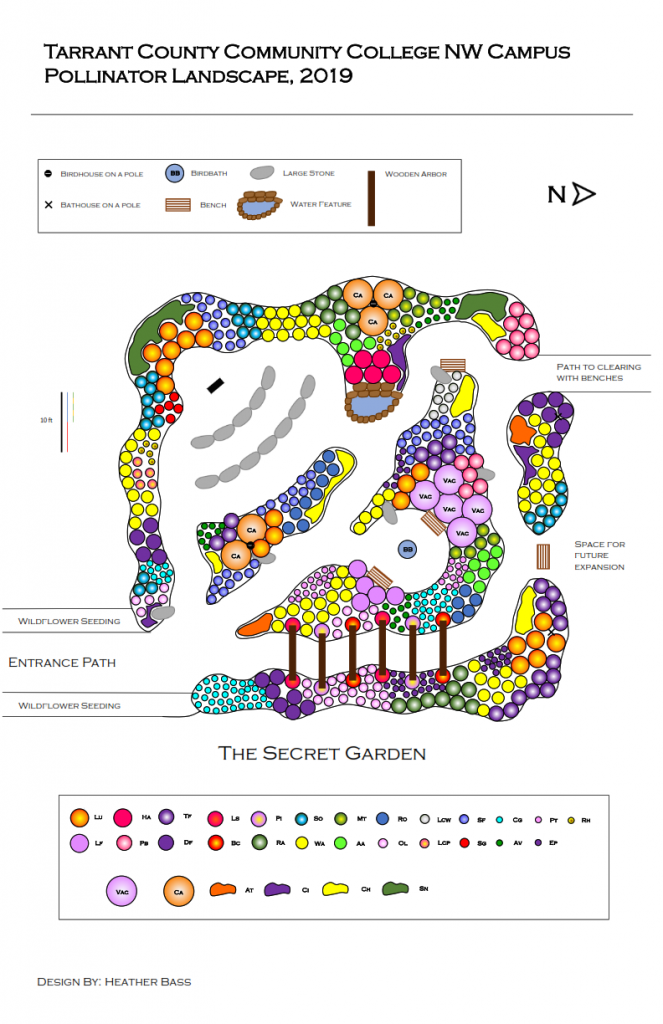 Planting was to be done in the spring, so a plant list was prepared early in the year and the plants that were not already in stock were ordered. One cost-saving feature that was employed was ordering plant plugs and growing them out, rather than buying more expensive full-sized plants. Since the horticulture department had the greenhouses and supplies to grow the plants, and students to tend to them, it was important to use existing assets in an efficient way. 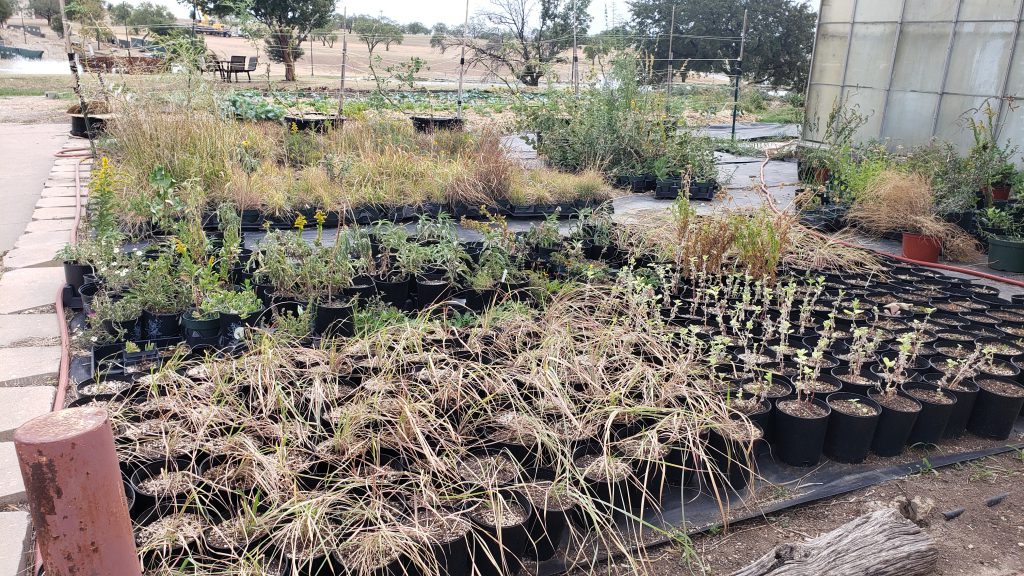 Plants being grown out for the garden.

While the plants were in their final growth stages before planting, the site was prepared. During the previous winter, the area was covered with plastic and solarized to kill all unwanted vegetation. Shortly before planting, the plastic was taken up and the soil beneath was tilled. Compost was brought over and incorporated into the top layer of soil. 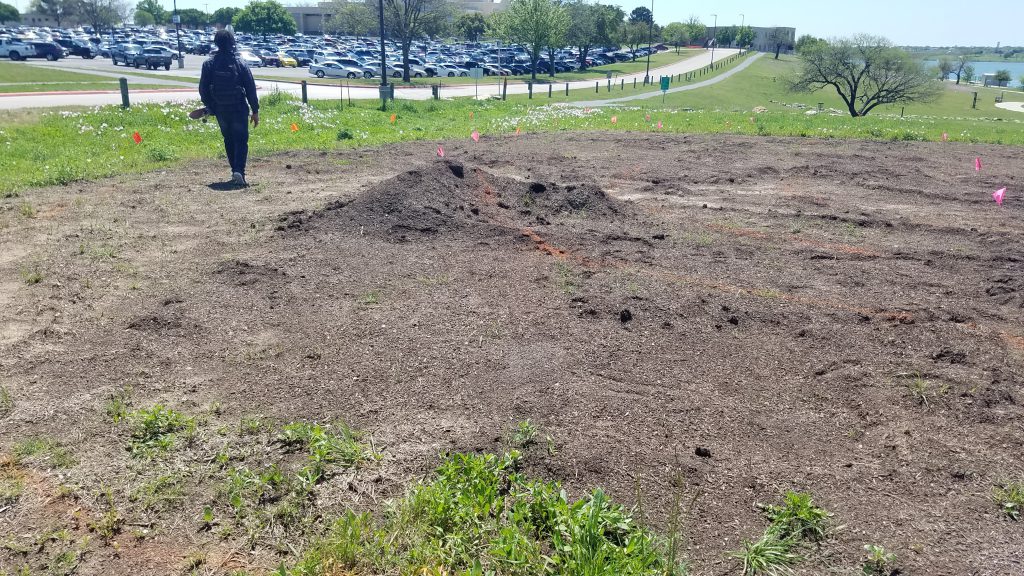 Beginning in April 2019, the design was used to mark all paths and features with flags and spray paint, in preparation for planting. Once it was time for planting in May, plants were brought over in flatbed trucks and students began laying the plants out according to the design. 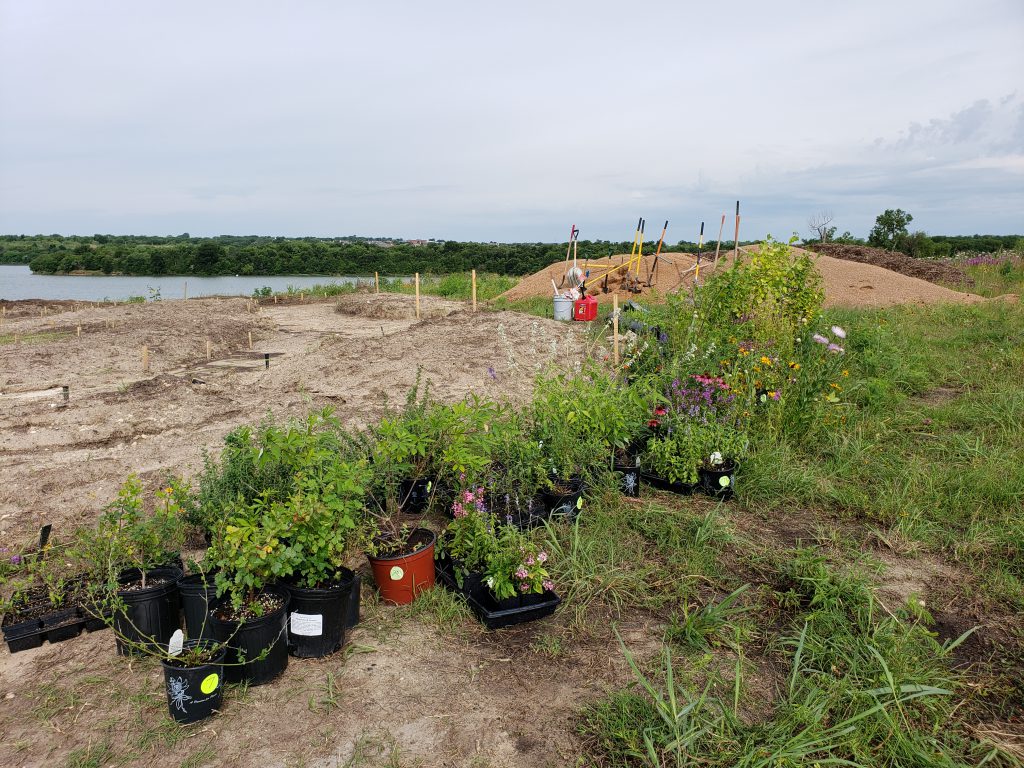 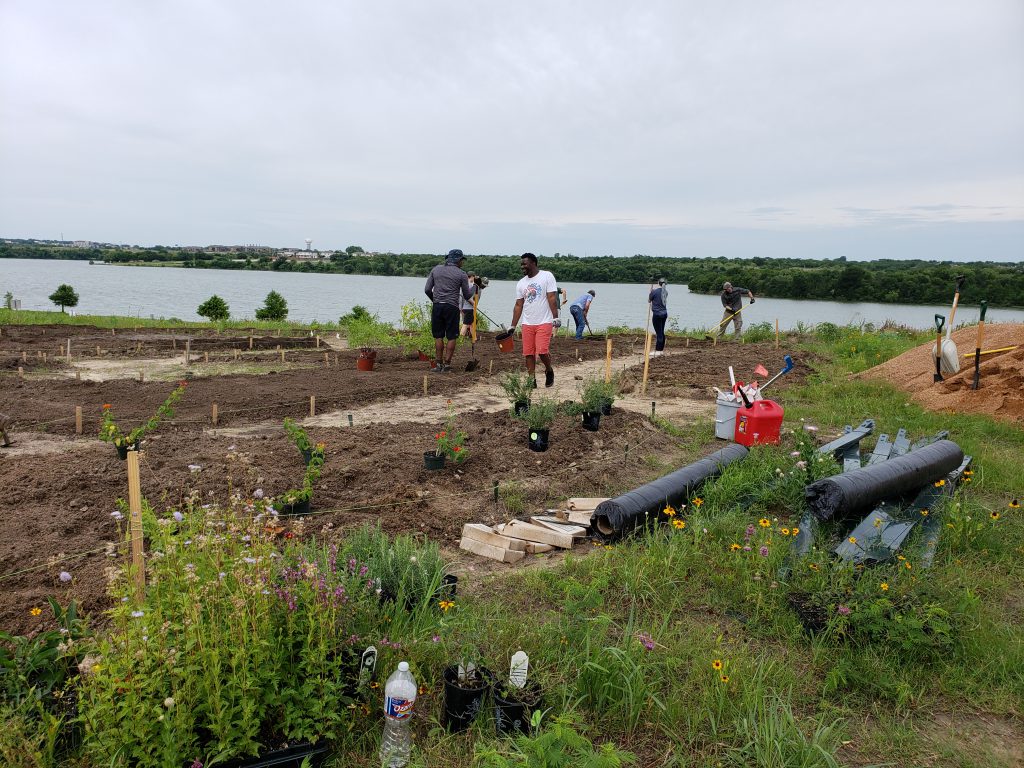 At first, the plants were watered at a higher rate to make sure they all got properly established and did not suffer from the heat of the summer. Next, edging was secured and boulders used in the outdoor classroom area were put in. After that the gravel paths were filled. Now, the water features and wildlife houses are to be installed. 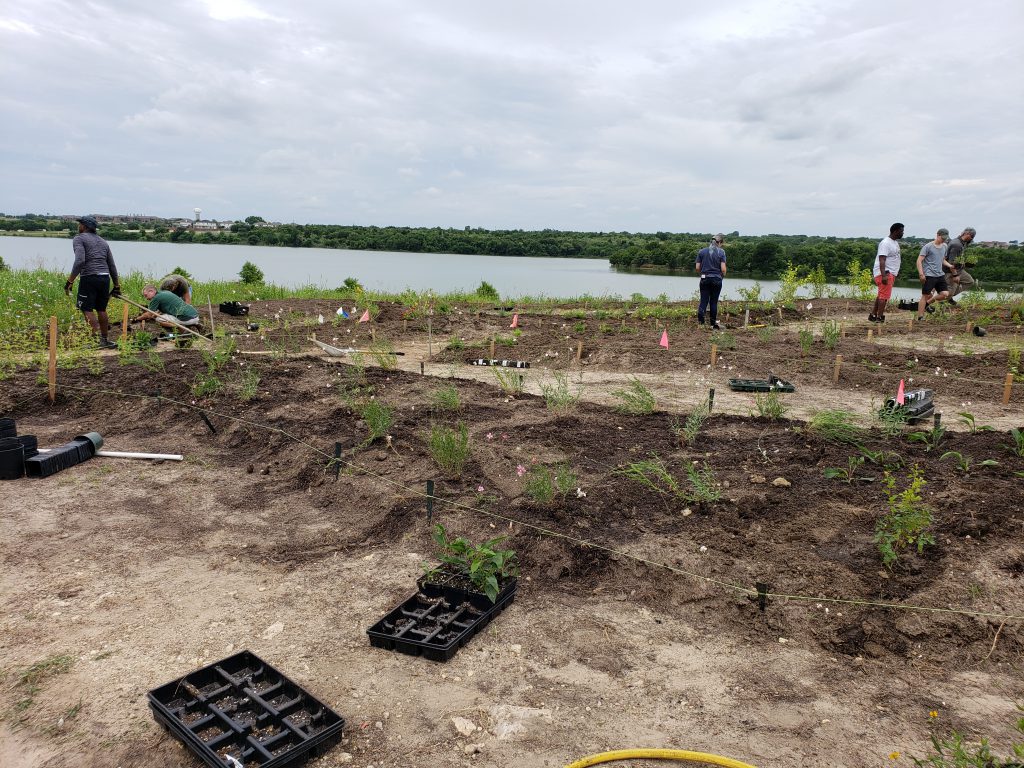 Most of the plants are in!

The plants have gotten bigger and the garden is starting to look beautiful now, in its second year of growth. Go check it out and take a walk on the trails!

Northwest edge of campus, on the shore of Marine Creek Lake, near Chisholm Trail High School 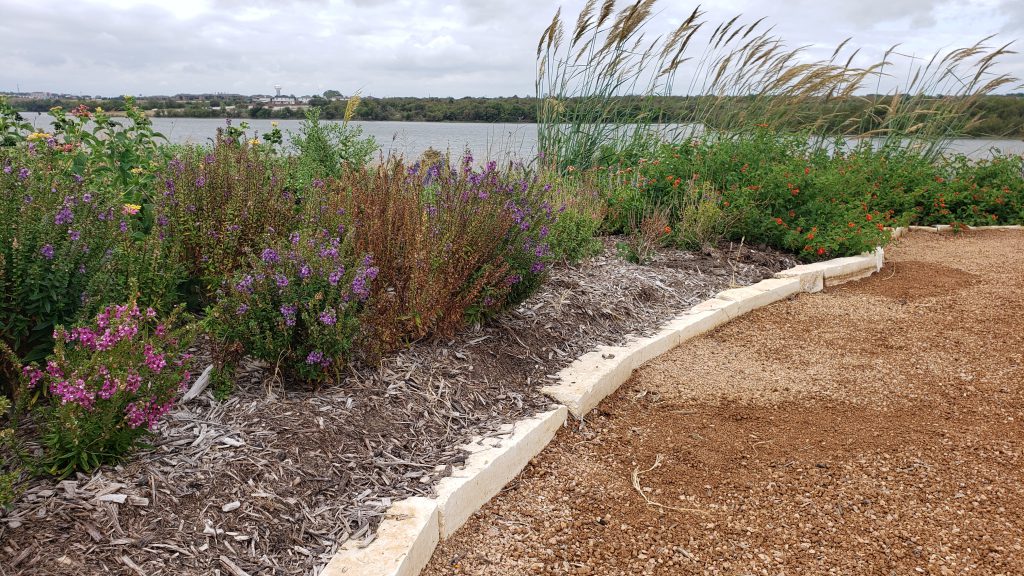 Plant growth from Spring to Fall. 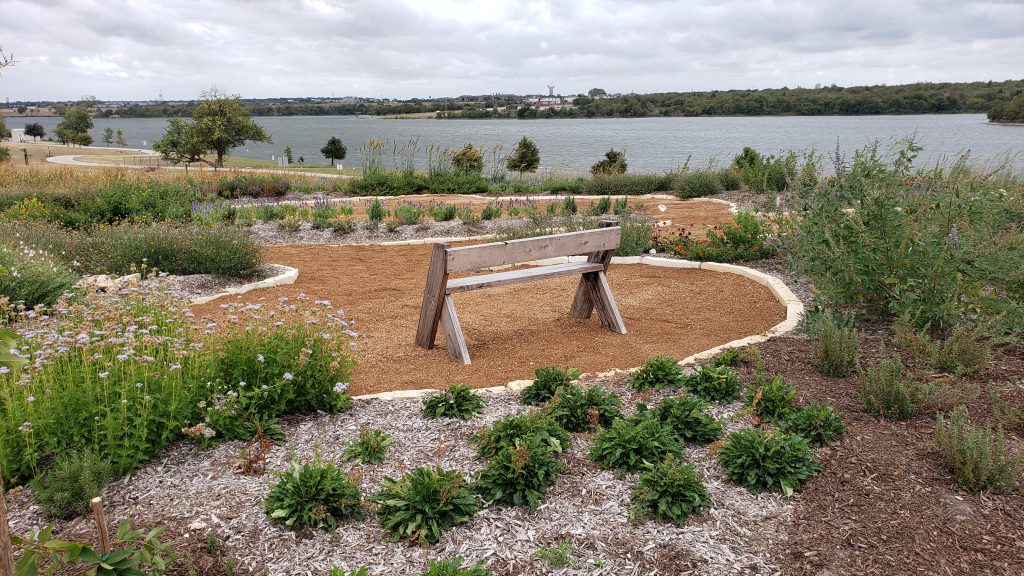 Looking over the garden to the lake. 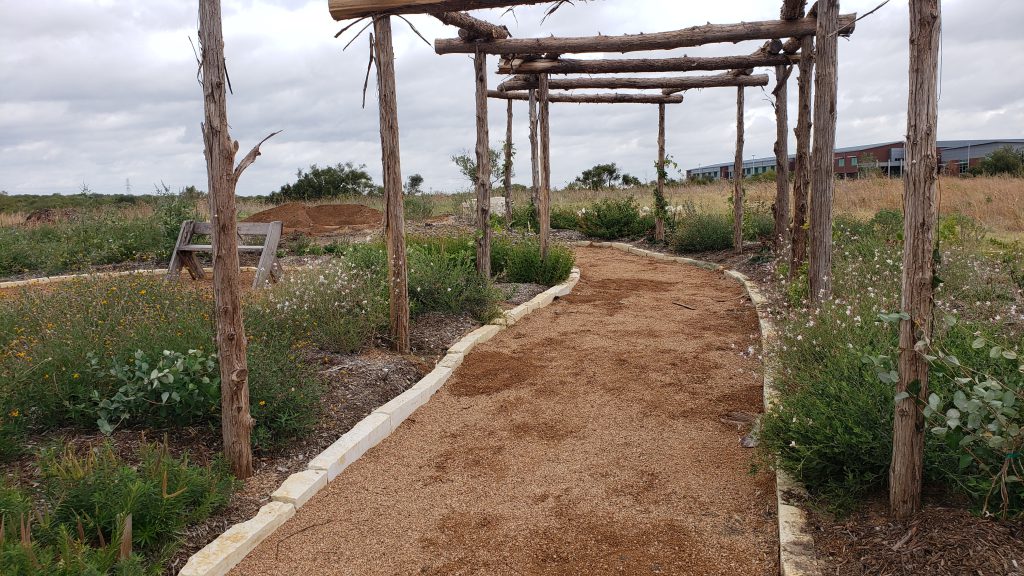 Trellis tunnel soon to be covered in vines. 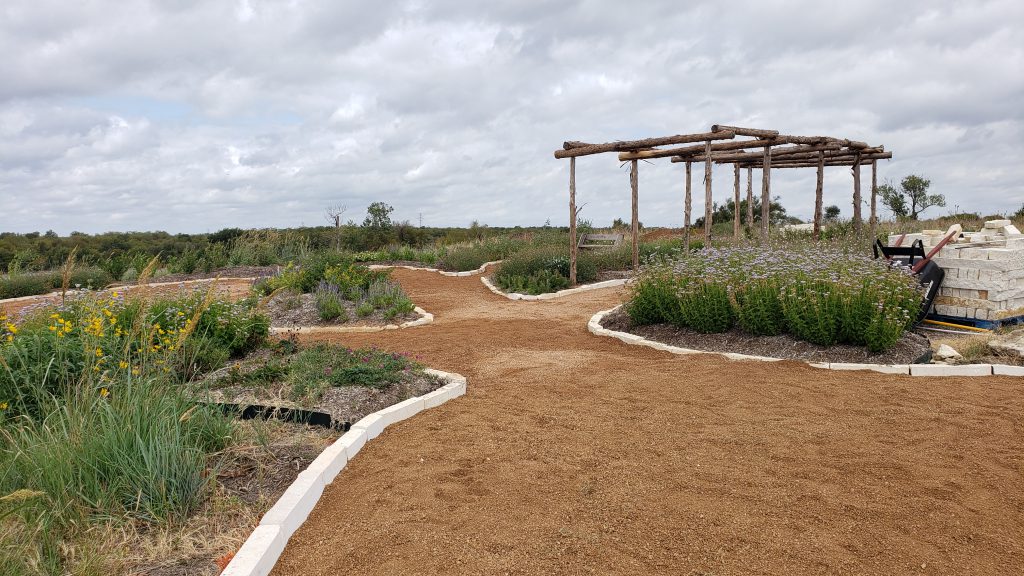 Stay Connected with Us

Stay up to date on all of our classes and events, and get the latest info on local water conservation and efficient gardening! Sign up for our newsletter today.

For more than 90 years, the Tarrant Regional Water District has improved the quality of life in the communities we serve by providing a reliable and sustainable water supply, vital flood protection and an outstanding variety of recreational opportunities.